Written in 1983 for a music magazine, but never published.

It was the summer of 1978. I had just turned 18 years old and had sent some transcriptions to Frank Zappa. He responded by putting me on salary to transcribe tons of music, everything from lead sheets to orchestral scores. The bulk of the work was guitar solos, some with their accompanying drum parts. Frank played all the guitars and Vinnie Colaiuta was the drummer. These guys used to take it out to lunch, experimenting a lot with rhythms and odd phrases. My task was to transcribe the stuff the best way I thought possible.

The tracks were recorded in several different manners. On some occasions, the band played together live. Sometimes FZ overdubbed his solos in the studio. One interesting thing that Frank did at times was to take a drum track from a certain time and place and then take a guitar solo from yet another time and place and lay them on top of each other. Frank released a book of some of these guitar solos and drum parts. It’s called “The Frank Zappa Guitar Song Book”.

While transcribing the material, I was often confronted with situations that led me to reach into the intuitional areas of my imagination to come up with various notational devices and constructions that I had never seen before. I soon discovered that many contemporary composers were then (and are still) using these notations.

In this article, I would like to show and explain some of these concepts and devices. Besides being of great educational value, this will also help to clarify the ambiguity behind some of the notation in the transcriptions found in “The Frank Zappa Guitar Song Book”.

A polyrhythm is just what it says. Two rhythms, or “feels”, happening at the same time. Most people reading this have a good understanding of the basic triplet. This, in essence, is a polyrhythm. It’s three 8th notes being played against two 8th notes. Some more basic examples follow… 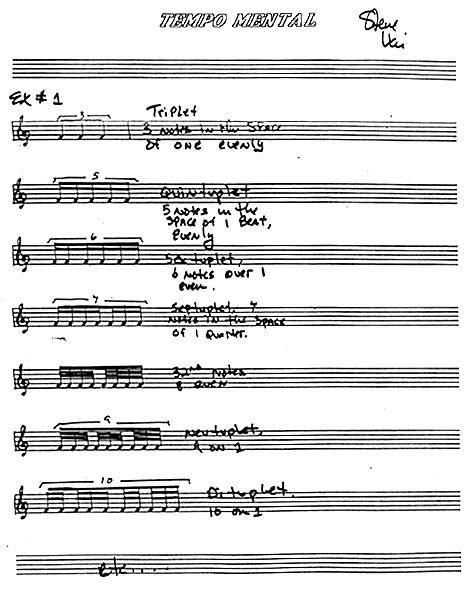 These rhythms could be played rubato (fluidly) or non-rubato (very strictly and evenly). Both ways have their own advantageous effects.

SUBDIVIDING OVER TWO OR MORE BEATS

Although some of these examples may seem ambiguous (and/or terrifying!), they can be played accurately if understood and practiced. When you have a basic pulse and you superimpose altered rhythms on top, you set up a certain flavor in the piece that cannot be expressed in any other way.

Some composers use metric modulation when they write. It’s an effect that can give the piece an accelerando or retardation feel. 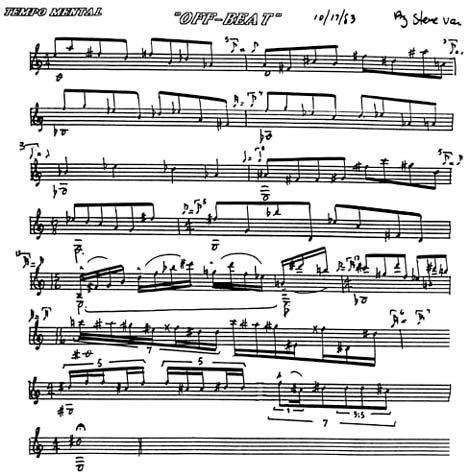 Another notational situation I came across was hearing rhythms go by that didn’t start on the beat. Some examples of this are as follows:

These examples could be rewritten using odd-time signatures, possibly making it a bit easier for some people to play. But if there were a strict pulse being used, then the way I notated it would likely be the best.

Another fine effect is a rhythm being displaced by a disconnected polyrhythm. It’s almost as if a metric modulation occurs in the bar, but the overall time it takes to play the bar is the same.

This bar starts out with two quarter notes (that’s one beat). During the next figure, the first two 8th-notes are played as 8th-notes of an 8th-note triplet. The time then resumes to normal so that by this point, one and 2/3 beats have gone by. The 16th-notes are played normally, making two and 2/3 beats played. The next 8th-note is played as an 8th-note from an 8th-note triplet. That brings the tally to three complete beats thus far. The remaining part of the bar is played normally.

Another (and what I feel to be simpler) way of notating this follows:

When using this type of notation in a composition, there would have to be some type of explanation of the beginning of the piece. Here are some more examples of this:

This is another way of writing example #1:

Another situation comes about when you have a metric modulation inside a bar followed by the tempo returning to its original time, leaving some unaccounted time to be dealt with. In this example, you have two 8th-notes, then two 8th-notes from an 8th-note triplet. That makes one and 2/3 beats played so far. Then you play four 16th-notes in the original time, making two and 2/3 beats. The next bracket indicates to play two 8th-notes in the place of one quarter-note (bringing the tally up to three and 2/3 beats) plus one 8th-note from an 8th-note triplet.

What the bracket indicates is to play two notes evenly in the space of one and 1/3 beats.

Some more examples of this follow. These examples take place in 4/4 time, but you can take this concept and mutate it for odd-time meters, waltzes, sambas, etc.

As you can see, these things take a lot of practice and good understanding. The best way to attempt to execute them is bit by bit.

Here’s one for all you maniacs:

This is extreme for today…but maybe not for the computers of tomorrow. [Note: this article was written around 1983 or 1984].

Another technique I use is that of overlapping polyrhythms. This can get kind of sticky and is best used when there’s no definite time signature going on.

One way of executing this phenomenon is to play the first five 8th notes as if they were equal to the 8th notes of an 8th-note triplet.

You can also rewrite it to look like this:

Some more examples of this type would be:

You can find examples of this in “The Frank Zappa Guitar Song Book”, although they are not quite as extreme.

Among the stranger things I’ve transcribed for Frank was the notation of actual speaking voices. An example of this follows: 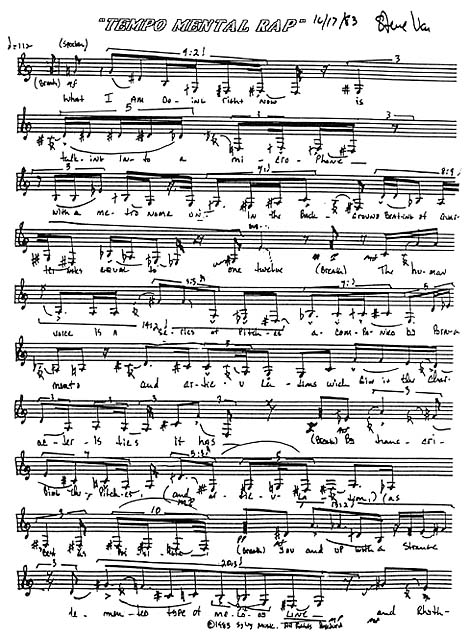 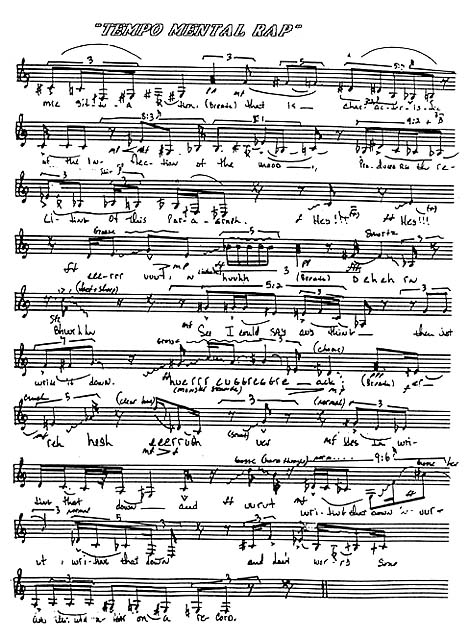