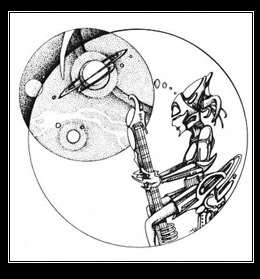 Sometimes we play things that just come out, and we don’t know why. I believe it’s divine inspiration. It’s possible to simply take these things at face value, but instead, let’s try to pin some “pictures” on these flirtations with divinity.

Pick up your instrument and play one chord. Try to invent one that you’ve never played before. (It’s simpler than it seems — just put your fingers in places you’ve never put them before, or detune a string or two.) Now strum the chord any way you like, and record it. As you listen back to your recording, let the chord “speak” to you. Allow the sound of the chord to evoke a scene in your mind — perhaps something familiar, maybe an experience in your life. Let your imagination run off for a while. You may start out with a mere impression, and end up with a whole story. Finally, write down whatever it was that you visualized. (When we were 16 or 17, my friend Joe Despagni and I used to do this extensively. We’d sit with a guitar, and one of us would strum a chord. We’d describe to each other the pictures it would conjure up in our minds — far-out and liquid).

This is an exercise of the imagination, and it should be taken to extremes. Don’t stop with just one chord. Listen to something that you’ve written in the past, or a popular song that you like. As you do, let your imagination go off on tangents. As you search for that special theme or melody, you may draw from mental pictures of an actual past event, a future one, or some totally off-the-wall scenario. After a while, you’ll see how this procedure affects your playing.

The following exercises may lead you to discoveries that you could not have attained any other way:

• Think of a person who is very close to you, or maybe even yourself. Construct a song in a standard form (AABA, or whatever), and have each section reflect a personality trait of that person. You’ll probably have to start out by defining how you view these different aspects of your subject’s personality. (This exercise may sound offbeat, but hey, what am I here for?)

• Try exaggerating your playing. If you think that a passage calls for a chord to be struck hard, smash it to pieces. If you need something fast and aggressive, be as furious as possible — more furious than you ever thought yourself capable of being. (But keep it clean and accurate, unless the part demands something else.) If a passage calls for subtlety, you yourself must be in a very subtle frame of mind. This approach is useful with dynamics — especially band dynamics — because dynamics are most effective when they are exaggerated.

• Think of the familiar expression markings you encounter when reading a piece of music (adagio, legato, and so on). You can actually apply any adjective to a piece of music. Take a random word from the dictionary, and apply it to a riff, song, chord change, or soloing approach (and don’t forget to use the exaggeration technique).

Whatever you do, GET CARRIED AWAY! (But don’t hurt yourself, or anyone else for that matter).