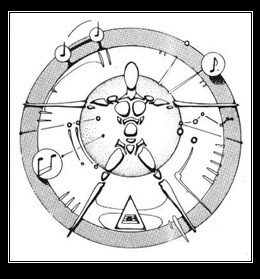 The Physical
by Steve Vai

Your face reveals much about your personality. When people talk, they use their faces, as well as their voices. Sometimes the true meaning of what they are trying to communicate (or not communicate) is visible in their face and body language.

Body language is an important part of expressing yourself. Just try getting through a conversation while keeping a stone-cold, straight-faced appearance — no laughing, hand gestures, or body movement, just lips. You’ll see that it’s much harder to express yourself.

The way your body moves reflects your true personality. When someone plays an instrument, facial and body language play important expressive roles. Some people hardly move at all when they play. This doesn’t necessarily mean they’re not expressing themselves, not that what they’re playing doesn’t mean anything — some people simply emanate expression from their very being. This, too, can be cultivated with the proper attitude.

Sometimes when you play, you hit a note or chord, and your facial and body expressions contort to match the audio expression. When this happens, it gives you a certain sense of freedom and accomplishment, and it’s very entertaining for an audience.

Here’s an exercise to help you use your body expressively. First, tape record a musical situation — a jam session, let’s say, or a series of chord changes with an overdubbed solo. Listen back and choose a particular section — a chord change, or a riff — that you like. Listen to it several times, and picture the music as an actual “little person” (looking like you, presumably, or a familiar figure like Gumby). If the little person were the riff, what would his body and face look like? How would he contort himself to give viewers the impression of audible sound? (This could be quite amusing….)

Now go back and listen to the tape again. Listen to the passage you selected over and over, but as you picture the body language of the little person, emulate it with your face and body. You’ll feel the notes more, and this will translate into your playing.

Here’s another exercise: While you’re jamming, choose a lick and cycle it over and over. While you do this, think of the point you’re trying to get across; then think of how what you’re hearing makes you feel. Let the sound express itself in a certain body movement. The movement might consist of throwing your head back, or blinking an eye, or a little pelvic thrust, or rolling on the floor in a convulsive frenzy while humping your guitar in an erotic extravaganza with your eyes rolling back in your head while your nostrils flare and large red veins bulge from your neck — but please be careful. (I think I know that riff, by the way).

Another exercise is one that I stumbled on when I was about 12 years old. Take a familiar piece of music, such as a favorite solo section. As you listen to it, let your face contort and express the music. The first piece I remember doing this with was “Midnight”, a great Jimi Hendrix song that appears on ‘War Heroes’. Try this technique with your own playing — let your face express what’s coming out of your speakers. This is great fun, and very entertaining. The more animated you allow yourself to be, the more the music seems to come alive.

True, it takes a certain lack of inhibition to use this technique live, but hey, what do you care, right? I don’t suggest you use these body language techniques ALL the time. But in the never-ending struggle to be original, you must search the depths of your soul, and these techniques may help.