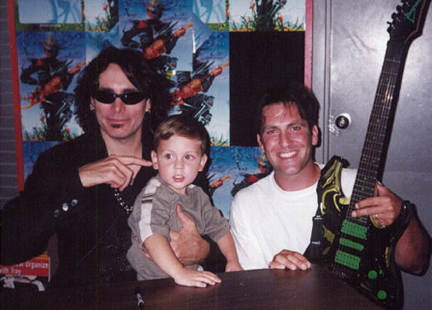 Here’s a pic of me and my son Brendan when we met Steve in Detroit on September 11th. It’s amazing to me the way his music is spanning generations. All morning prior to meeting Steve, my son was bouncing off the walls singing “Ya Yo Gakk!”

When we finally got in to see Steve, we were planted in front of one of the speakers, I tried to cover my son’s ears, but he said he couldn’t see Steve “By” (he has a hard time saying Vai!)

We finally got to meet Steve, and he signed my Universe and my son’s Les Paul Pee Wee. We were going to have the picture taken, and Steve grabbed ahold of Brendan and set him right on his lap! Too cool! I waited a long time for this moment, and all I could spit out was “great show, I can’t wait for you to come back!” (picture me as the kid in “A Christmas Story” saying to Santa that I wanted a football instead of the Red Rider BB Gun!)

Anyhow, Steve’s performance was amazing, and I can’t wait for the show in Detroit!