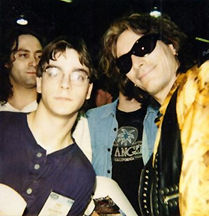 Steve,
It’s a bit dated now, but I finally scanned my Polaroid of us from the Winter 1996 NAMM show. I think I was the only person there with a stinking Polaroid camera. The upside was that I didn’t have to wait to see if the picture would come out. You might remember, I doubt it, but you might. I was the guy with the Polaroid. One of the people helping you there asked to get a picture of you and her with my camera. You were very nice and signed 4 or 5 photos for me to take back for my friends as well. You were very friendly, and had to lean over the counter quite a ways, and grab me and pull me in to get the shot. I remember thinking “WOW Steve Vai is practically hugging me”. Another cool note is that the shirt you have on must be one of your favorites, because it’s on the G3 CD too. I got that CD and told my friends HEY I TOUCHED THAT SHIRT!! Your music does nothing but inspire me. There is a part in “Ultra Zone” when you’re getting all quiet, and playing the small licks in the middle. Then you just grab it and go, the part almost sounds like your fucking your guitar (edit for content if you must here) and not in a nice way :-). Unlike in “Bad Horsie” when it sounds like your doing it nice and slow. Anyway, that’s a rather sick line of thought, but it’s what I picture in that part of the song. I’m a member of that camp that thinks you and Joe Satriani should get together for an album. He was the reason I picked the guitar up in the first place because of “Day at the Beach”. Eddie Van Halen made me keep playing after I realized how hard that stuff is. You, however, put me in total awe. I had Passion & Warfare before I ever started playing. That was mostly because “The Audience is Listening” was a cool song, that anyone could dig. I was also into Zappa. After I discovered the guitar, that album was my favorite. I used to sit in the dark and listen to “For Love of God” and try to see and feel the music. “Sisters” was the first one off of that album I was able to play and make it recognizable. I’ve babbled on enough. I hope to see this pic and letter on your site!