The name says it all! Discuss Steve's studios, your studios and gear set-ups, amps and effects here. This is not for discussing guitars (Steve's or otherwise).
Post Reply
4 posts • Page 1 of 1

Inspired by your 1990 sonic masterpiece (easily my most-listened-to album of the last 25 years, thank you!) I've focused considerable time and money over the last few years to try to better understand the guitar tones as they sound on that album (I've built my own "mini mothership" based on your gear list for the album, pictured below). While I've made some promising progress towards my goal, I feel like I'm failing to fully understand how best to put all of this gear together and I think only you (or Pascal) can help at this point. I would very much appreciate any details you could recall about the remarkable engineering on PAW. 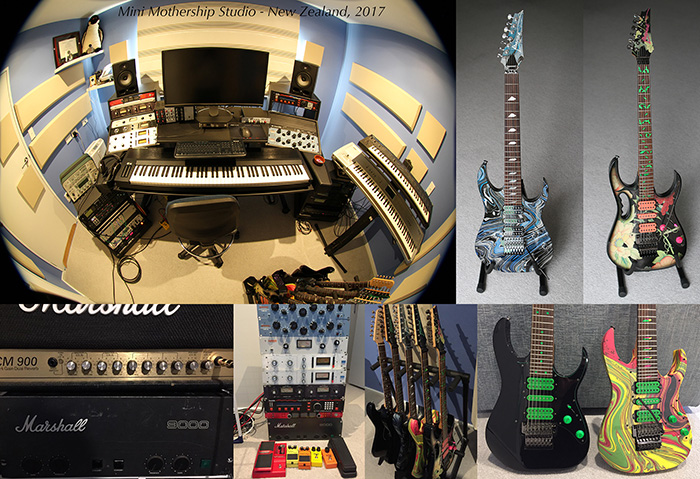 1) How did you make the guitars so loud in the mix, particularly on The Animal? You hint at this motivation in your inspiring 25th anniversary video "trying to make the guitar solo longer and louder" and it sounds to me like The Animal is slightly different than the rest of the album. Do you recall what you changed on The Animal and your general approach to EQ/compression for lead guitars on PAW? It sounds like the guitar amp is as loud as a nuke going off with incredible energy from 400Hz-2khz without ever sounding honky or boxy, sounding powerfully squeezed through compressors.

2) It sounds like a very loud 480L Ambience verb on the guitars, yet the guitars remain in your face close up in the mix. Was this EQ or ducking or pre delay?

3) What can you recall about the use of Urei and Neve compressors, their order, their settings? There is a wonderful warm and unique attack to the lead guitars (esp. Liberty) that I'm guessing is partly a function of your picking and possibly 1176s or LA3As or tape compression, but I haven't been able to replicate. Can you recall:
a) which of 1176 Rev H silverface, LA-2A, LA-3A, 33609 were used on guitars on PAW? (I base these guesses on later images of The Mothership)
b) If you used 1176s, do you remember what settings, all button mode? Before/after 2A/3A?
c) Was the 33609 used on the mix bus or on individual guitar tracks? Limit or compress?
d) If 2A/3As were used, do you remember if they were on compress or limit mode?
e) Were you hitting tape particuarly hard to achieve a desired compression or saturation? Were all tracks at 30ips on 456 or just the final master?
f) Did you use parallel compression on the guitars?
g) Did you track with compression?

4) In the Expo Sevilla 1992 performance of FTLOG it looks like the neck pickups are set really low - or is that just an illusion because they have black on the sides and the middle pickup doesn't? 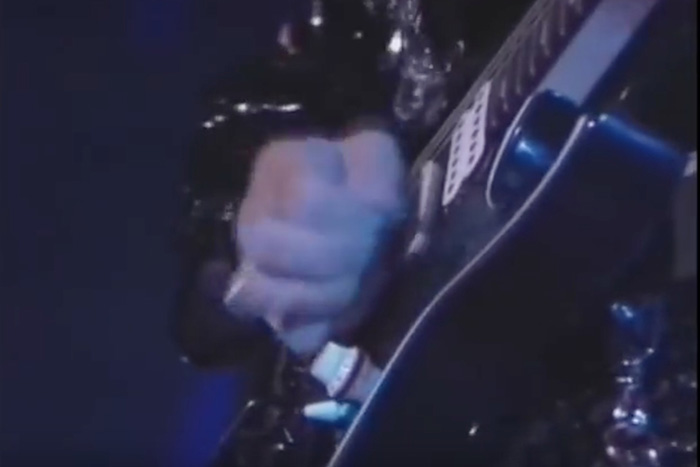 6) I haven't added a Yamaha Graphic EQ or the massenburg GML 8200 to my mini mothership yet. The mention of the graphic EQ is intriguing: do you recall how it was used on guitars?

7) The lead tones for most of PAW, especially the Riddle, sound to me like mostly a 421 on the cone of a G12M25 greenback. There is a distinct fingerprint consistent over all of the isolated guitar tones on PAW that isn't shared by your release of Lovely Elixir---it doesn't have the same cliff at 5100Hz that the rest of the album has, suggesting that you choose a different mix of mics/cabinets for that song. Can you comment at all on that?

Did you compress both cabinets in parallel with different settings? Is that why you had dual 1176s and LA3As?

Jumped the gun there on assuming Vintage 30. Looks more like 30W G12Hs on Lovely Elixir, as you mention in the gear list. 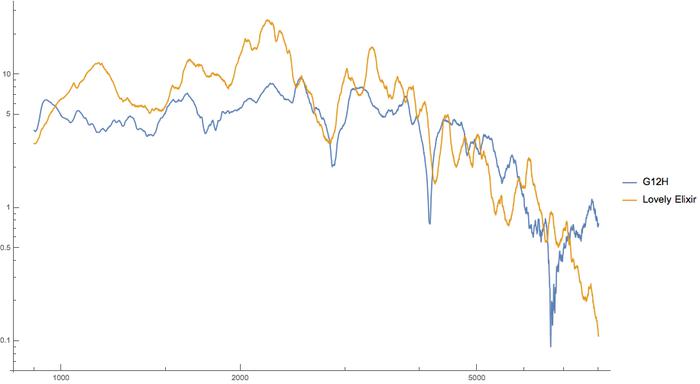 Hi there! Regarding your question about the pickups on the Ibanez played by Steve in Sevilla in 1992, I got to know the guy Who provided and setup the guitars for him on that occasion. He is a great sound and guitar tech and builder, with his own line of guitars who works on a regular basis with some of Spain's top notch guitarists and has been official tech for various brands (at least Gibson and Ibanez for sure). He told me he took I think 2 or 3 Ibanez guitars down to Sevilla. Just stock guitars, no mods or tweaks. He handed them over to Steve, who made his choice, and asked him if he wanted anything done to them ir if he needed any special setup, and Steve just said no. They were just fine. That is what Alberto (that's his name, I won't give you his surnames) told me as far as I recall. It must have been 1997 when our conversation took place, so he had It very recent.
Top
Post Reply
4 posts • Page 1 of 1