Hello @Jeroen and the rest of Vai team (and Steve if he comes through here). Long time no see (post), but I've been lurking from time to time around here.

That said, I have noticed a few missing guitars, a few mistakes and I think some cool info could be added.

Missing guitars
-UV77MC with yellow pickups that was Steve's co-main guitar (together with #SV107 Zahara) during the Whitesnake tour and was used to perform Star Spangled Banner. Sold by Mikey a few years ago, I believe.
-Universe #1 prototype, desert yellow, sold years ago and used on Whitesnake album.
-Jem 777DY with a 77FP neck, that was a backup during the Skyscraper tour. Auctioned for charity in the early 90's, I believe.
-Performance Guitars Flame #2, now owned by Thomas McRocklin
-UV77MC with a Monkey Grip, now owned by Thomas McRocklin
-Brown (telecaster maple neck, matching headstock) and natural (rosewood neck) Strats from this photo. Possibly stolen during the 1986 theft? 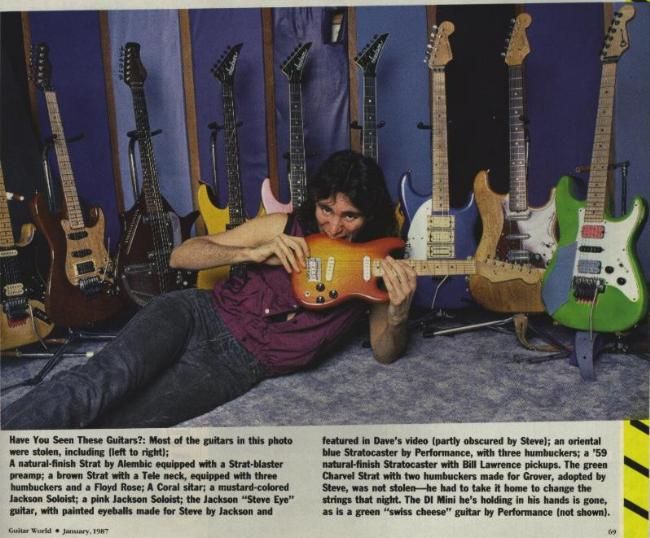 Mistakes
-#SV322, Verena, the Ibanez Les Paul is listed as an acoustic.
-#SV87, Flo, is listed as Jem 7VWH. She is a transformed 77FP.
-Bo, Chu and Mojo's descriptions say no Sustainer and LED's. Also Bo and Mojo are prototypes, I believe.
-Flo III is listed as a standard Jem 7VWH. She is a LACS, I believe.
-#SV313, Annie Fanny, is it really a Schecter or is it a Performance guitars body with a Schecter neck?
-#SV83 and #SV61 are both named Sofia. Possibly a mistake, since no other 2 guitars share a name?

Info that could be added
-#SV14, The Playboy Guitar, was smashed after EEAS tour and flushed down the toilet in Florida, because Steve was so frustrated with it. I remember reading that on the internet somewhere (Steve's journals?) and thinking, well this is the closest Steve will probably get to Keith Moon on the RNR destruction scale.
-#SV316, Elwood strat, was given away to a fan at the end of Power Live concert with Alcatrazz in Tokyo, after being thrown around by Steve and Graham. https://www.youtube.com/watch?v=QJ2Fn8GQi0s
-#SV292, Red Heart I, used to have 777LNG necks and no neck pickups on the 12 string and the left handed necks.
-#SV288, See Mee Blue, is hanging at the Ibanez LACS lobby.
-#SV84, Bodhi, was used on PAW (seen in the making-of video next to Green Meanie) and Wheeping China Doll.
-#SV291, FLOG, was also used on The Riddle.
-#SV153, RDZNL, I think it has piezo system installed. Also played by Mike Keneally during the G3 2012 Australia/New Zealand rehearsals.
-#SV32, Lavendar, was used on Sex And Religion tour.
-#SV321, Bear, is Bo's backup live. Tuned to drop-C.
-#SV159, Hellyard, was auctioned off at Cliff II benefit.
-#SV98, Mojo, was used on Building The Church on G3 2005 live in Tokyo.
-#SV31, Crystal Cream was used by Dave Weiner and Mike Keneally on The Ultra Zone Tour. Possibly the 2nd Jem with a sustainer (after Flo).
-#SV35, Roxy, was formely named Pox and used on Aching Hunger live during the Fire Garden tour (tuned to Eb).
-#SV106, Is it a backup Bad Horsie guitar? The new Bad Horsie 2? The one used at Astoria when Bo got out of tune?
-#SV87, Flo, pre-transformation was a co-main guitar (together with #1 Jem) on Skyscraper tour and featured in Just Like Paradise video. Used on Ballerina 12/24 (seen on making-of video) and possibly other tracks on Passion And Warfare.
-#SV39, Aiden, was Steve's main live 6-string guitar between the end of his stint with Whitesnake and Sex And Religion, when Evo took that spot. Used on most of the songs during Expo '91 Sevilla concert, used during 1993 jam with Mike Boyko and possibly used on Passion And Warfare, since she is amongst the guitars in the studio (together with FLOG, Bodhi, Flo, Green Meanie, Tander and a few other Jems)

I hope this helps.

The Stucco Blue guitar (#SV314) was used on Breaking The Heart Of The City with Alcatrazz and it seems to be tuned to drop-C.
https://www.youtube.com/watch?v=9fKaSPrLRT8

The gallery is a living document. There are many things not included yet for various reasons, but we continue to add/update on a daily basis.

Will post here if I remeber anything else.
Top

-#SV310, Flame, was used on DLR tour as a main drop-D guitar on "Unchained".
-Flame #2 (owned by Thomas McRocklin with Ibanez neck) was used on Whitesnake tour on Cheap An Nasty.
-#SV176, YJ, was Steve's main drop-D guitar during Alcatrazz, used on "Night Games". https://www.youtube.com/watch?v=1h_pN4Ho3Qw Also a backup drop-D for Flame during EEAS tour.
-#SV9, BB, was used on "Jump" during Skyscraper tour.
-#SV143, Kenji, was used on "Dancing Days" during the Ernie Ball 50th anniversary show. Other songs were played on Flo III.
-#SV187, Gemerald, was used on 3 songs during Expo Sevilla show (Driven By You, Tie Your Mother Down and Rocky Mountain Way) with original pickups and on Letterman 10th Anniversary show with new all green pickups.

Guitars per song, past Zappa, pre-Sex and Religion:

Disturbing The Peace Tour (as per Tokyo show)
-Stucco Blue (drop-C): Breaking The Heart Of The City
-Green Meanie (pre-refinish): Jet To Jet, Skyfire, Sons and Lovers, Hiroshima Mon Amour (1st half than he breaks a string), Will You Be Home Tonight, Kree Nakoorie, Since You've Been Gone,
-Sticker Strat (with a different body?): Hiroshima Mon Amour (2nd half), God Bless Video, Suffer Me, Jack The Ripper, Too Drunk To Live Too Young To Die, All Night Long
-Julieta: Paited Lover
-YJ (drop-D): Night Games
-Elwood: end of All Night Long

Note: During some shows a 777DY Jem (possibly the one that was later fitted with a 77FP neck) was used instead of Flo and sometimes, Marton the floral Jem with Pyramids, was used on Knuckebones. (Worchester show)

Whitesnake (as per Donnington show)
-Zahara (with Pyramid neck): Slip Of The Tonugue, Judgement Day, Slow An Easy, 2nd half of Cheap An' Nasty, Most of guitar solo (including Audience Is Listening), Still Of The Night
-UV77MC with Yellow pickups: Slide It In, Kittens Got Claws, Is This Love, Crying In The Rain, Fool For Your Loving, Here I Go Again, Bad Boys (1st Half),
-Flame #2: 1st half of Cheap An' Nasty
-Glissando: For The Love Of God (partial), Ain't No Love In The Heart Of The City
-Red Heart II: Bad Boys (2nd Half)

Wow, Matic, youre an encyclopaedia dude! I wont ask how you know all this, as i can see youre a huge fan, and fans take note of stuff, right?
SV357 is a new addition from the 90s era, what do you know of that MC beauty other than what steve has added? If it was a back up i guess it wasnt used that much on tour?
Zahara is the Don!

Return to “Steve's Guitars and Gear”