I notice on a lot of your album you mention using Eventide Harmonizers. Do you know where I can buy one and how much they cost? Also, is there any way I can buy a left-handed version of any of Ibanez’s Signature Steve Vai series guitars?
– Sherri Durham

Check out www.eventide.com for more info on the Eventide Harmonizers.
There (was) a lefthanded version of the Jem produced: the JEM555LWH. This is still available in some music stores – or check on ebay.

Hi Steve,
I bought your last opus recorded during the live sessions and i was really happy to find ones you made with us on the 23rd of march 2000 in Bordeaux (it was not at the “Theatre Barbey” but at the “Krakatoa”). In the song “Being With You (in Paris)”, who composed the few lines in French? (really nice accent!). I hope you will have time to answer to me.
A french fan.
Charlier Fabien

“Ooops, I don’t know how we put the wrong venue name but thanks for pointing it out. I will ask Mike to post it on the site. I composed the letter that was then read in French at the show. It was translated by John Pusztai who was also the one that recited it. It’s sticky sweet.” 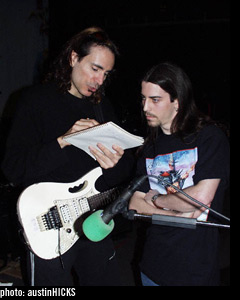 John Pusztai (pictured here with Steve) tells the story of how it all came about:
“Here’s what happened on what was probably the most incredible day of my life so far: I’m a Vai fan. Actually that’s a bit of an understatement, but you get the picture. I also live in Paris, and after attending the local gig of the Ultra Zone Tour here on March 15th (2000), I thought there was no way I wasn’t gonna see that show again, so I went to Strasbourg. I got to the venue around 4pm that day (April 1st), and the doors were open. Talk about blind luck!

The band was doing the soundcheck. I sat down in the back, where some other people were hanging. Obviously it was amazing! At one point, they started to play that song Steve had just written, which sounded like a Parisian ballad. Then I heard Steve saying he needed a translator. I was sitting next to his tour manager, so I told him I could do it. And it worked!

So there I was up on stage! I thought Steve just wanted to talk with some french person, but actually, the song they were rehearsing was written for France: they were going to perform it that night, and record it in order to put it on a live album. Steve asked me to translate a poem he had written from English to French, and to recite it in the song. It was about a particular day he had spent in Paris with Pia, and what the feelings it had evoked in him. Too bad Phil (Bynoe) doesn’t speak French though, it would have made it sound like Barry White! (j/k ). I went to the dressing room to do the translation, and then we rehearsed it a couple times. Then the soundcheck came to an end. It was time for the band to relax before the show and to have dinner. I went to a nearby chinese restaurant with my friends but I couldn’t eat!

Eventually the show started. I spent most of it running around backstage almost shitting my pants, I was beyond nervous! Right after Voodoo Acid, it was time for me to hit the stage. Pure adrenaline! It went pretty well, although I think I was shaking a bit. It was very magical. God what a memory! Everyone in the crew was really cool to me. My deepest gratitude to you guys, especially to Steve for making this happen, for being my greatest inspiration (not only musical), and many other things!
Warm Regards – John Pusztai”