The Big Ask: If My Guitar Could Talk. A Jem documentary.

This is the forum for all Steve Vai-related discussion including Steve's albums, videos, performances and frequently asked questions.
Post Reply
4 posts • Page 1 of 1

TO: Steve Vai
FROM: Mark Stubbs

Hello! It is a great honor to write to you and temporarily be under the impression that you are indeed reading this. I’ll say first that I am a huge fan and have two Jems that are signed, one of them #185 LNG, the other one a floral print.

I’m currently working on a music project that is rather multi layered. I thought it would be a novel idea to also initiate a film project to document the music project. Furthermore to truly bookend this ambitious endeavor, I thought to myself, “Why not make the film about whether or not I can encourage Steve Vai to make time to join a project for a noble cause. After all I just watched the truly earth shattering Jamathon!”

So to that end my plan is to start the film with the big ask. The opening scene will be me writing you this missive inviting you to become part of the project somewhere along the way. Do not be afraid to turn me down several times before swooping in at the 11th hour for the dramatic and fashionably late entry. It will add to the suspense of the film which will of course begin with the ask and end either with a warm and thankful credit for your participation or the epilogue that Mr. Vai declined to participate in this film. Having duly yet subtly twisted your arm let me say welcome to my film. I’ll explain the premise thus…

The film, to be called tentatively, “DeCav’s Tangents” will revolve around the recording of a song. I have created an episodic 15 minute piece of music and deliberately left many pockets and empty spaces that need bass lines, guitar lines, strings, vocals... you name it.

The aim and ultimate arc (underneath the overarching theme of can or can I not get Steve Vai to participate) will be turning this music into a tribute to my alma mater Dorman High School. To that effect I will go on a search tracking down alumni of all ages that are graduates of Dorman and also still playing music and recruit them to lay down tracks of all kinds and to populate this song and have it overflow with the creativity of generations.

At the end of this film will be the final product, a 15 minute music video paying tribute to everything Dorman. Among other phenomenal and lesser known talents it has been suggested that the surviving members of the Marshall Tucker Band might be interested in participating in this project.

Of course I know awesome musicians who aren’t Dorman graduates, so one of the jokes of the film will be to slip in the occasional musician from a different high school (the film will attempt to briefly show the yearbook photos and class year of each contributor). You see one of the other layers of the film will be my active social participation in the high school football community for the last 8 years. I have been messaging and blogging about football ( a little ) and life ( A LOT) on South Carolina High School message boards. The amazing people and experiences constitute in my opinion a need to be recounted.

Needless to say it did not end well for Jeff. That is to say if you read the end of the second thread you’ll see it did end quickly but to say it didn’t end well wouldn’t be true. It could be said he and his family experienced as beautiful a passing as could be had. It occurs to me now, and yes I mean now and not before I began writing this that I posted the lyrics to your song “Brother” on Jeff’s facebook page after his passing and his sister picked them up and recited them for her brother’s eulogy.

These are the kinds of musings over the years that kind of grew a following and allowed me to meet a lot of new and interesting people and make new friends. And of course some of them are musicians so I’m thinking, “Why not just sneak these guys in? Yeah it’s all about Dorman graduates but what about tributes to Dorman from OTHER alumni? Yeah, let’s do that.

And while we’re at it let’s see if alumni from other states would be interested….guys like Steve Vai. Really it was the Jamathon that put this idea into my head. You only have yourself to blame. I kid. I kid.

So that will be the film. There’s a deeper more final message to the film which will be revealed towards the end. And then almost as an epilogue or tease I’ll have the film briefly mention my stand up comedy and my patent pending invention for traffic stops.

SO! Welcome to the project. It’s good to have you aboard. We encourage you to muddle up the story arc and suspence and jump in early or put it off till the last minute with a dramatic flourish like having to sit through Crossroads just to get to the head-cuttin duel. Or you can be a more passive participant and receive a footnote at the end of the film. Which is totally cool too! You have paid any debts to Karma with your true and passionate direction and dedication in life.

I hope this letter finds you well and in good spirits.

A LOT!
In January my little brother died from natural causes. I'm 47. He was 45. A long hard life of partying and an absolute abdication of responsibility mixed with substance abuse and addiction led to many years of being homeless or living in missions.

This lifestyle resulted in rapidly deteriorating health later in life leading to two heart attacks and a stroke.

His death and funeral sent the movie plan off in a new and completely unforseen direction.

You see...I mentioned having a Steve Vai original Jem 777 LNG signed from the factory #185 in my first post. I mentioned it in an offhand way as a tangent and excuse to post on Steve Vai's forum.

What I did not and could not forsee when making my first post in this thread was how the skeins of the tapestry of fate would curl back on themselves and touch RIGHT back to Mr. Vai and the guitar I owned for 30 years.

There were things I did not know about this guitar until my brother died. And as stated he died only after I paid to start production on the film I planned to make about football fans and making a musical tribute to my Alma Mater in upstate South Carolina.

Now this documentary aims to tell the story of the friendship between my little brother and his best friend through their teen years, the story of how one of the 777 LNG Jem's wound up in a music store in Spartanburg, SC and eventually owned by my brother's best friend who had to sell it to me when times got tough.

The film will chronicle the uncanny Bill and Ted like story of my little brother the drummer and his friend the guitar player with the Jem 777 and their adventures together. Their will be two story arcs, one that goes back and tells a story that is 30 years old about a friendship and the adventures the Jem was always a part of. The second story arc will move forward and capture the creation of an instrumental tribute to the High School all three of us attended.

The first planned film will end with the guitar being returned at his friend's funeral to the original owner of the guitar 30 years after he sold it and also the culmination of a project to get all Dorman alumni who are still musicians to contribute to an original instrumental.

A second film will chronicle the second chapter of the guitar's "life" with me as the second owner and the band the guitar was always a part of through four years of touring and recording with interviews, archival footage, and road stories. 2019 is the 25th anniversary of the last recorded tape the Jem was featured on and might possibly be the year the recording is re-recorded by the original members of Guards Of Eden. The second film will also chronicle the ongoing musical careers of two of the original band members.

A third and final film is also scheduled to begin shooting this year chronicling an as of yet unrevealed subject which is at present secret in nature.

A GoFundMe project is currently being built to help fund this ambitious project and will probably launch in the next month or two.
Top 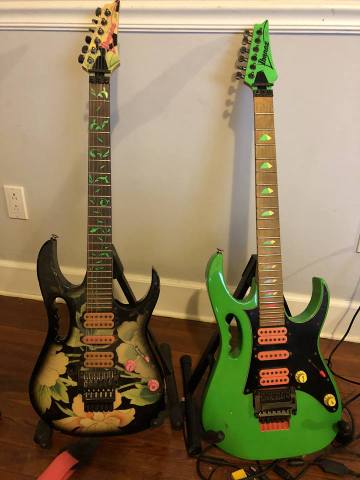 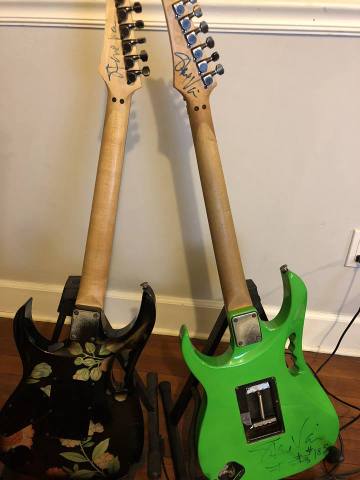 Also one of the story arcs planned to be included in the film is another true story about a RUSH fan from Wisconsin who recently needed to get to his sister's funeral in Minnesota and was posting on a Neil Peart Facebook group looking to sell a rare promotional tapestry from Tama drums endorsed by Mr. Peart.

The RUSH fan was prepared to sell the tapestry at less than half it's values for plane tickets and wouldn't you know there were what I can only describe as "vultures" swooping in to snatch it up. I knew from talking to my brother's friend this year what it was like to have to give up a rare and prized item for cash and then live with that for 30 years. So I figured out a way to get him the money for the plane tickets in what was almost a comical way. I'm hoping to include this story arc also and maybe if Mr. Vai is too busy to participate we can enlist the members of Rush to join the project in some capacity. 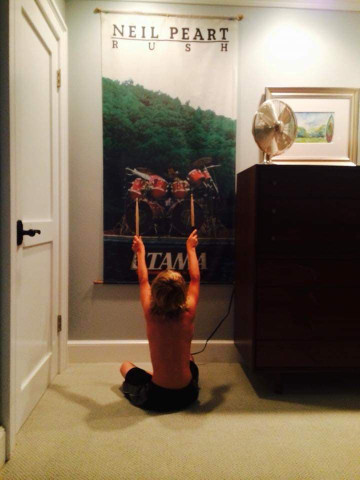 Return to “All About Steve”